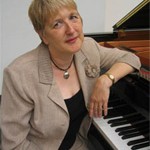 Dorothy de Val is a musicologist and pianist whose research interests include Scots Gaelic song, the first English folksong revival, pianos and pianism, and Haydn reception in England. Particular research interests include early 20th-century collectors and arrangers of folksong, particularly Broadwood and Grainger, and collectors of Gaelic song (Tolmie, Broadwood, Murray and Kennedy-Fraser).

Dr. de Val is the author of  In Search of Song: The Life and Times of Lucy Broadwood, published by Ashgate in July 2011.  She is a contributor to the Oxford Dictionary of National Biography and many music reference works including The Haydn Companion, and is a regular reviewer for the journal Music and Letters. With Patricia Debly of Brock University she organized a conference on Haydn in 2009, sponsored by York University, SSHRC and The Wirth Institute. She is also a member of the North American British Music Studies Association, whose conference she organized at York in 2008.

Professor de Val’s research extends into the field of dance, focusing on English social dance and Morris dance (especially Mary Neal and the Esperance Club). She co-organized a conference at York on English country dance in the summer of 2010, and performs regularly as pianist for English country dances with her group, Playford’s Pleasure, with a focus on the life and times of Jane Austen. Her most recent project involves performing music from Jane Austen’s own collection, featuring composers such as Pleyel, Sterkel, Storace and Kotzwara.

Robert Witmer is a bassist and ethnomusicologist with research interests in North American and Caribbean music. A former member of the Vancouver Symphony, he has also been active as a jazz and commercial musician.

Professor Witmer has written on a variety of North American and Caribbean music topics for journals, anthologies and music dictionaries. He is the author of The Musical Life of the Blood Indians (1982), editor of Ethnomusicology in Canada (1990) and co-editor of Canadian Music: Issues of Hegemony and Identity (1994).

In 1995, Professor Witmer received the inaugural Faculty of Graduate Studies’ Teaching Award in recognition of his contributions to the advancement of academic excellence and the quality of graduate teaching at York University.

Professor Westcott is a pianist, composer, arranger, musicologist and music theorist specializing in African-American and classical music of the 20th century.

A piano player from the age of eight, William “Bill” Westcott studied blues piano with “Little Brother” Montgomery, a major blues-recording artist of the 1930s and of the later blues revival, alongside his formal university training in music. This experience confirmed him in his life-long interest in early blues and jazz piano styles.

While working occasionally as a soloist and accompanist in classical performance, Professor Westcott has performed as a band member in various rock, Dixieland, country and western, ragtime, jazz and blues ensembles for more than 40 years. He has appeared as pianist and singer in Canadian and American music festivals as well as Canadian radio and television broadcasts. Orchestras in Canada, the United States and Eastern Europe have performed his original compositions and arrangements.

Professor Werren has composed electronic music for film, mime, dance and theatre as well as instrumental and vocal works. He has conducted extensive research into electronic and computer applications in music composition and teaching.

Professor Otto has studied a wide variety of world music cultures. An experienced performer on the Japanese koto, his research interests include the Muranao kakolintang of the southern Philippines, the music of Greece in relation to its neighbouring cultures, and music of Toronto’s immigrant groups.

Professor Mott is a saxophonist and composer whose work draws on western art music and jazz traditions as well as the musical styles of Asia and Eastern Europe. He was a founding member of the contemporary music ensemble Sound Pressure and also performed extensively with the saxophone quartet 40 Fingers and the contemporary jazz ensemble Chelsea Bridge. Well-known for his solo performances, he has also collaborated with York music professor, pianist Christina Petrowska Quilico and a host of other artists, including bassist John Geggie, pianist David Lopato, pianist Marilyn Lerner and bassist Victor Bateman. He performs with concert accordionist Joseph Petric as the duo Erosonic.

Professor Lidov has composed many works for orchestra, chamber ensemble and voice. His scholarly research focuses on the semiotics of music and musical analysis, including computer-based research on music and expressive gesture. His most recent book is Is Music a Language?published by Indiana University Press (2004).

Professor Gittins is a jazz pianist and an experienced show conductor, arranger and accompanist for stage and recording artists. His scholarly research is in the field of music theory, particularly in jazz, and in the history of ideas.

Professor Clarkson has published numerous articles and reviews in the fields of medieval, Renaissance and contemporary music, as well as a book on the pianist and educator Reginald Godden. He is currently working on a critical edition of the music of the 20th-century composer Stefan Wolpe.

The founding Chair of York University’s Department of Music, Professor Beckwith is a musicologist, an experienced choral conductor and vocal coach, and a professional singer. A specialist in the field of Russian music, his scholarly interests include intellectual and cultural history and the psychology of music. His longstanding interest in the electronic and experimental arts is reflected in his extensive research on new technology applications in the arts, particularly in the areas of music composition and analysis. Professor Beckwith also taught in the Humanities Division in York’s Faculty of Arts and is Senior Associate of the Centre for Russian and East European Studies at the University of Toronto.